Origins of Some of the Most Famous Bingo Calls

If you’ve ever played bingo in a physical venue, then you’ve probably heard the caller utter some seemingly nonsensical phrases after certain numbers. At least, phrases like ‘one little duck’ or ‘bang on the drum’ sound like nonsense at first, but they’re actually carefully designed nicknames given to the numbers drawn on the bingo balls. Callers may come up with their own variations depending on the crowd, but there are a few staples that pop up wherever you decide to play bingo in the UK.

These calls are traditionally associated with the action that unfolds in bingo halls, but there’s no reason why you can’t shout out these classic nicknames when playing a more modern version of the game, such as via an Android app on your mobile or tablet. Here’s a quick guide to some of the main categories of bingo nicknames, which you can use as inspiration to create your own calls.

There are straightforward references to the value of a number. You’ll often hear dozens used to greet multiples of 12, from the ‘one dozen’ for 12 to the ‘four dozen’ for 48.  ’20 – one score’ is a reference to the use of ‘score’ to describe a group of 20 units, which might be archaic in everyday vocab but feels right at home in the weird world of bingo calls. ’33 – all the threes’ and ’55 – all the fives’ are a bit more self-explanatory.

90 is ‘top of the shop’, as it is the highest number available in a game of 90-ball bingo. As detailed in the Vegas Slots guide to online bingo, 90-ball bingo is not as popular as the pattern-based action of 75-ball bingo. However, the 3×9 bingo cards of 90-ball bingo are the ones you’re most likely to find in the UK – that’s why we’ve got calls going all the way up to 90. If you play 90-ball bingo you also get to hear ’84 – seven dozen’, which really feels like callers have relied too much on their dozens. ’45 – halfway there’ is another call specific to 90-ball bingo, as 45 is half of 90.

Some bingo calls are based on physical descriptions of numbers, such as ‘2 – one little duck’. That’s because the number 2 looks like a duck, of course. ’27 – duck and a crutch’ is because the number 7 obviously looks like a crutch. Okay, you might have to use your imagination on these a little, although ’11 – legs eleven’ is a bit easier to comprehend. The number 11 is supposed to resemble a pair of chicken legs, so anyone who wolf-whistles at that number during a bingo game clearly loves KFC a little too much.

’53 – here comes Herbie’ is a shoutout to the famous car’s racing number, ‘6 – Tom Mix’ is a reference to a star of early Westerns, while ’39 – steps’ is a sensible tribute to the film The 39 Steps. One particularly memorable phrase is used for 50, where the caller might utter ‘5-0, 5-0, it’s off to work we go’ in honour of the legendary tune from Snow White. 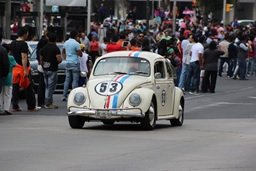 Time for a rhyme

When in doubt, get a rhyme out. These don’t really need much explanation; ‘3 – cup of tea’, ‘8 – garden gate’, and ’66 – clickety click’ are neat little rhymes that roll nicely off the caller’s tongue. Slightly more dubious rhymes include ’60 – Grandma’s getting frisky’ and ’86 – between the sticks’; there’s definitely room for improvement there if you plan on coming up with your own calls.

Other bingo calls worthy of mention include ’14 – the lawnmower’, as lawnmowers used to have 14-inch blades, and ’57 – Heinz varieties’, a nod to the company famous for ketchup. Some calls require more explanation than others, but bingo players generally embrace the quirkiness of these nicknames. Whether you’re playing in a bingo hall or you’re playing at home, knowing the calls adds an extra dimension of fun to the bingo experience.

Get Free Bingo with No Deposit needed